Fiscal Year 2017 continues to be an exciting and challenging year for your Co-op. We started the year with our focus on opening Willy North in August. Given the short timeframe to open, we continue to work with our Owners and the community to determine the optimal product offerings along with accommodating the impact to staff and operations at our two other retail sites, our Production Kitchen, and our administrative staff.

Competition for natural and organic foods continues to increase both nationally and within the Madison market. Opening a third store on the northside of Madison will help meet the needs of the neighborhood, allow our Co-op to maintain and grow our market share, and obtain quantity discounts on our purchases of products as our sales grow.

The fiscal year 2017 budget was prepared by management, reviewed by our Finance Committee, and approved by our Board at their August 2016 meeting. 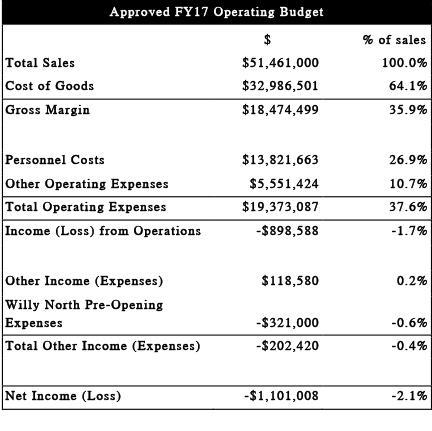 Total Sales. The FY2017 sales projections for combined operations, including the opening of Willy North, are based on our January 2016 market research report from Dakota Worldwide Inc. The budget includes increased sales as a result of opening Willy North, a small increase in sales at Willy West, reduction of sales at Willy East due to lost sales to Willy North, and an additional decrease in sales from incoming market competition. Willy North’s actual open date was two weeks later than what was anticipated in the operating budget.

Gross Margin. Gross margin refers to the percent of sales remaining after subtracting the cost of goods sold. Gross margin dollars are the funds used to pay for our operations. Our gross margin of 35.9% is slightly lower than the previous fiscal year. The decrease is the result of changes in our product mix with anticipated increases in sales of lower margin items. We also anticipate price adjustments for some of our products to continue to be competitive in the Madison market.

Personnel. Personnel expenses are budgeted to be 26.86% of sales, which is slightly higher than the previous year. The increase in personnel costs stems from budgeting for higher initial labor at Willy North and anticipating an increase in our starting wage when we implement a new livable wage model.

Profitability. Higher personal expense, increased depreciation expense, smallwares, repairs and maintenance, and pre-opening expenses associated with Willy North means your Co-op is projecting a net loss for FY2017. A net loss for the first couple of years following expansion was projected and planned for at the time the expansion project was approved by the Board in April. 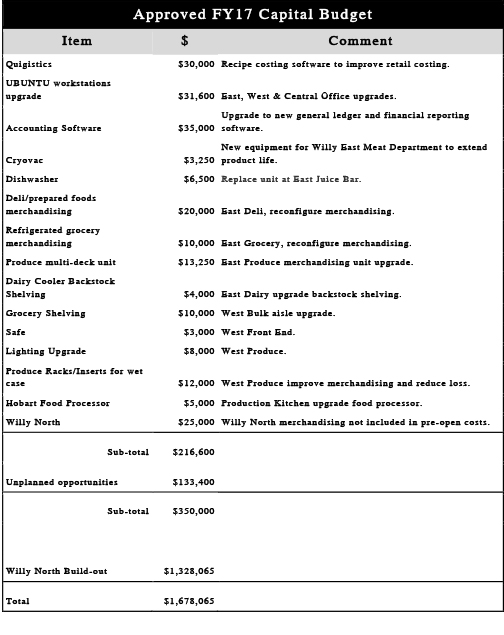 The capital budget this year includes expenditures related to opening Willy North, software and operating system upgrades to become more scalable as we grow, equipment replacement, and merchandising upgrades at both Willy East and Willy West to allow us to respond to increasing competition in the Madison market.

The total approved budget to open Willy North is $2.75 million. Since some of the expenditures occurred in FY2016, the budgeted expansion does not tie directly to the FY2017 budget. 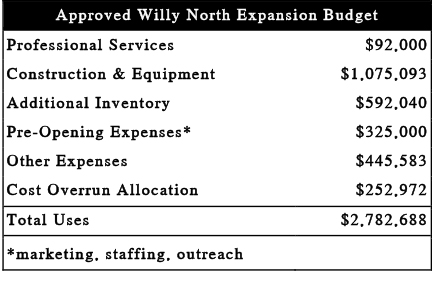 If you have any questions regarding the FY2017 budget, feel free to email me at This email address is being protected from spambots. You need JavaScript enabled to view it..

As I will share in our Annual Report, fiscal year 2017 brings the opportunities and challenges of opening a new retail site. With staff, Board members, and Owners, we look forward to another successful year!