The Ruesch family of Vesper, Wisconsin shares a long and fruitful history of

farming in Wood County. Part of an enclave of Swiss settlers, the family maintained a dairy operation for over 100 years until 1990 when Tom Ruesch began growing the state’s first organic cranberries on a lower portion of the farm’s 80 acres. This fall, the farm’s new owners—Tom’s son Brian and his wife, Mary Ruesch—will hand-harvest their acre of organic cranberries and send nearly 15 percent of that crop to Willy Street Co-op.

The Ruesch Century Farm rolls downhill on three sides from its highest point near the house. The cranberry bogs can be seen at the foot of the property, in a marshy area adjacent to the northern edge of the ancient Lake Wisconsin basin—a relentlessly flat stretch of peat (moist, decaying organic matter) and sandy soil ideal for growing cranberries. In fact, Wisconsin cranberry growers now harvest close to 60 percent of the cranberries consumed in the United States and it’s no coincidence that the glaciated area around Wood County holds the title as largest-producing county.

On a recent visit to the farm (along with Willy Street Co-op Produce Manager Andy Johnston) Brian gave us a tour of the property, including the maple grove, historic house, barns and bogs. Though his father Tom passed away just last December, Brian spoke comfortably about his father’s passion and ingenuity for farming and family values. There was evidence of those intentions everywhere around the farm—a well-worn treehouse, a thick rope resting near a rusted engine once used to pull tobogganers up a good, long hill, and countless other indications of a large and active family. 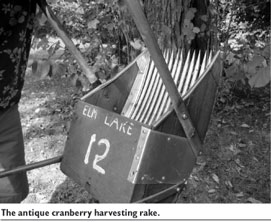 Having learned the cultivation of organic cranberries from his father, Brian (also the Director of Development and Alumni Relations at Assumption High School in Wisconsin Rapids) monitors moisture levels in the bogs daily throughout the growing season with occasional help from his brothers who remain in the area. The three bogs, constructed adjacent to a meandering spring-fed creek which serves as its water source, became visible once we were near their edges as Brian set out to demonstrate their hand-harvesting technique for us. In a surprising move and without hesitation, Brian led us off of the grassy pathway that surrounds the bog until we were standing on top of the dense canopy of cranberry plants. Except for a soggy channel surrounding the bog, the dark thick mass of vines, leaves and berries surprisingly prevented us from sinking into the muck below. Zipping out and around in long, spidery networks of evergreen-like vines, we could readily see the bright white-to-red berries, still about three weeks away from harvesting.

Like most perennials, cranberry vines occasionally need pruning to stimulate better fruit production. In a method that simulates pruning, but doesn’t require actual cutting of the vines, Brian uses a strategic layering of sand to “cut off” long vines and encourage regeneration between smaller stretches of vine. When properly tended, cranberry vines remain productive for up to 50 to 80 years. This may explain Wisconsin’s distinction as the largest cranberry-producing state over the former record holders—Massachusetts. Brian says of the upset, “Out east, they have vines that are well over 75 to 100 years old. Most [farms] in Wisconsin have put in new vines and consequently that older vine doesn’t produce as much.”

Bending down and starting with a dredging motion, Brian dragged the cranberry rake through the thicket of vines as the rake’s spiked tines whittled through the greenery and separated the berries before sending them into the bin at the other end with a final swoop of the rake. Later, Brian explained the benefits of this form of hand harvesting called dry raking. “What’s interesting,” he began, “is when you look at the history of cranberries going over to Europe, they would take these cranberries and they would survive a three-month sea voyage. So, when you dry-rake, they stay in good condition for a longer time and helps to maintain the integrity of the berry. If you dry that berry right away and get it cool, it still has a very good shelf life.”

When the bin on the cranberry rake is full, or too heavy to continue swinging it through the thicket, the fruit is emptied into shallow wooden drying crates. After sorting out the stray vines, the crates will be stacked next to the bogs and the cranberries will be left to dry for a few days. Or if the season is wet, Brian will move the crates to the barns and begin using fans to finish the drying process. As he set about picking out stray vines from the small demonstration harvest, Brian finished describing his routine. “It’s kind of a one- or two-man show. Last year it took us a couple of weeks and we literally hand-raked the whole [acre],” he said.

Once the fresh berries are adequatelydry, Brian brings them to a neighbor’s farm who lends them the use of their bounce machine to sort the good berries from bad, before packaging them. Then, like his father did for over 10 years, Brian delivers the berries to the Willy Street Co-op where they’re sold by the carton. After the first round of fresh berries are dry harvested, the bogs are then flooded and those berries are sold to a broker for juicing.

Ruesch is certified by Midwest Organic Services Association (MOSA) and Brian expressed his satisfaction with the extensive advocacy they have provided his organic farm. Brian also belongs to the Wisconsin State Cranberry Grower’s Association, who provide important lobbying efforts on behalf of the area’s cranberry growers, even though they may not see eye-to-eye on every growing practice. Non-organic cranberry growers have access to a long list of fungicides, herbicides, insecticides and other synthetic chemicals to combat pests (black-headed fire worm, fruit worm, fungi, etc.), which are typically attracted to cranberry bogs. Brian explained his theory and practice of organic pest control, which consists of periodic flooding during critical points of the season, but reported they anticipate losing a full 30 percent of their crop every year.

Responding to a question about how he feels the organic movement has changed since the USDA National Organic Program was instated, Brian answered, “I think there’s a better standard overall, a unified standard in the industry.” He then went on to ponder the future and prospects of small-scale organic farmers. He said, “As organic products become more mainstream, you have larger growers and companies deciding that this makes a lot of sense, and they say, ‘Let’s do it ourselves.’

The concern I have is that even with cranberries, you have large corporate conventional growers deciding, ‘Let’s go organic,’ and then all of a sudden you have a 100-acre cranberry marsh that’s organic now and a small little grower like me does not have much control over what happens after that. My fear is that organic is going to become the 3,000 and 5,000-cow dairy herd and the 100- to 500-acre cranberry [bog] and for me, it kind of takes away from the whole idea back in the 1970s and 80s of getting back to this small grower concept. When I look at the future, [the question] is, will the small organic grower be of any consequence?”

For more information on the Ruesch Century Farm, log onto: http://organic-cranberries.com.

Andy in Produce recommends that when you see the Ruesch Organic Cranberries on the shelves at the Co-op (because this is a seasonal product), that you buy what you think you’ll need for the year, then freeze them for your holiday and year-long baking needs. As Brian says, “There’s nothing you can’t do with a frozen berry that you can do with a fresh berry.”