Consider the following:
Scenario 1: You buy a bag of a popular national brand frozen organic broccoli at a chain store. About 13% of that money goes to pay for the operations and salaries of the staff of that particular store. The rest is whisked out of state to the grocer’s corporate offices, the distributor who shipped the product to the store, the large farm and processing plant in California or Mexico where the broccoli was grown and to the pockets of shareholders.

Scenario 2: You buy a bag of Willy Street Co-op brand locally grown frozen organic broccoli at Willy Street Co-op. About 25% of your money goes to the operations and staff of the Co-op. About 40% goes to the local farmer in Cross Plains who grew the broccoli, and about 35% goes to Innovation Kitchens in Mineral Point who processed, froze and bagged it. If there’s any extra profit on that bag of broccoli, it is given back to Co-op owners in the form of a Patronage Refund and to Co-op staff in the form of Profit Share.

The largest part of Willy Street Co-op’s portion of the broccoli money goes to employees, who use a portion of their paychecks to patronize other local businesses in Dane County. Some of it is used to pay the employees’ health insurance, and ends up in the pockets of doctors, nurses, and other clinic staff who in turn patronize local businesses (including the Co-op!).

The demand that you create when you purchase that bag of broccoli allows Willy Street Co-op to grow its economy of scale. This allows us to open a new store on the north side of Madison. This new store gives more people access to the broccoli, and allows the Co-op to purchase more broccoli from local farmers and give more business to Innovation Kitchens.

The Multiplier Effect
The phenomenon described in Scenario 2 is called the local multiplier effect. This is a tool used by economists to describes how many times money is recycled within a community—the greater the multiplier effect, the more wealth a product or organization generates for the local economy.

Studies have shown that food from small Wisconsin farms (like the broccoli farm in the example) has a multiplier effect of 2.6, meaning that for every $1 of locally grown food sold, $2.60 of local economic activity is generated. That’s in stark comparison to food grown by very large farms, where the multiplier effect is only 1.4.
Why the huge difference? Small local farms, especially organic farms, rely heavily on people power and employ many more people per dollar earned than large farms. Their crops are usually sold directly to consumers or other local buyers (such as food co-ops) and much of the money stays close to home.

Very large farms usually grow only a few crops and rely more on chemicals and machinery than on hired workers. This reduces their labor costs but also drastically reduces their local multiplier effect. The crops are sold into the national and international commodity market and they (and their economic potential) are quickly shipped out of town. Here in the Midwest we commonly think of corn, wheat and soybeans falling into this category, but it also perfectly describes the broccoli farm described in Scenario 1. Beyond the wages given to the farm workers who grow and pick the broccoli, the town where
that broccoli is grown probably doesn’t see a whole lot of economic benefit.

Food co-ops have a multiplier effect of 1.6, compared to an average chain grocery store’s multiplier of 1.36.  That might not seem like a huge difference, but when you consider that Willy Street Co-op sold $45.2 million dollars worth of groceries last year, that means that almost $10 million extra dollars stayed in our local economy because people chose to shop at Willy Street Co-op instead of chain grocery stores.

Roughly one-third of that $45.2 million in Co-op sales was for local product. The more local food our Owners buy, the greater our multiplier effect, and the greater the economic benefit to all of us.

Job Creation
Another interesting way to look at the economic impact of local food is by measuring job creation. According to one University of Wisconsin–Madison study, for every $100,000 in local food sales, 2.2 jobs are created.

In Fiscal Year 2016 (July 2015 - June 2016), Willy Street Co-op paid out roughly $4.3 million directly to our local farmers and producers. Do the math, and you come out with 96 local jobs that were created by local purchases at Willy East and West. Add the anticipated sales of Willy North into the mix, and we’re talking more like 120 local food jobs supported next year, all with their own potential to add to that multiplier effect.

Sometimes Bigger is Better
Expansion is sometimes a controversial topic at our Co-op. Though there are many Owners who are excited to see us expand and grow our business, there are also people who (understandably) are suspicious of this growth. Big business is not always good business; in fact, in many cases the larger a company gets, the more detached it gets from its home community and the more of its profits end up in pockets that are far removed from where the business is actually located.
Our Co-op is different. Since the people who shop in our stores own us, we will never do many of the things that a big chain might do. We’ll never decide to skip town or move to a more profitable neighborhood; we’ll never be beholden to shareholders on Wall Street, and we’ll never expand to a new location or do a major expansion without a democratic vote of our Ownership.

To us, growth means something totally different than what it may mean to a large corporate grocery store: It’s not about maximizing our profits, it’s about using the resources we have to amplify our multiplier effect and creating more wealth for all of us right here in Dane County. The more we sell, the greater percent of overall grocery dollars spent in Dane County go to work generating more local economic impact. 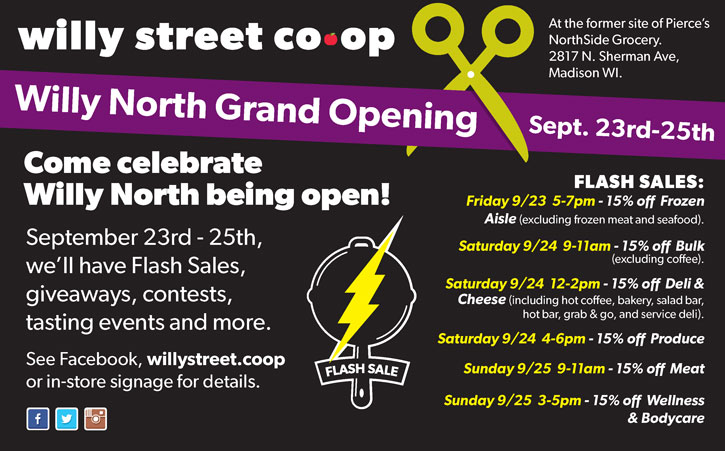 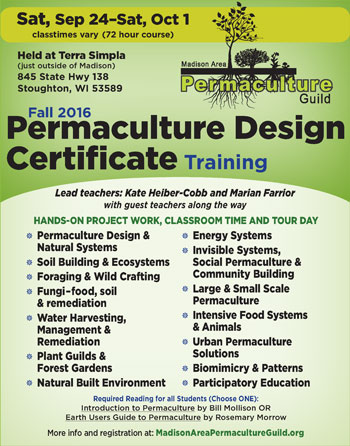